Protect the realm that is your farmer's garden from the other farmer. Summer is coming!

Thanks for reviewing my game. I was cringing very hard as you never discovered that a farmer can throw the pumpkins. Instead of moving a farmer after it is selected, it is possible to then select an adjacent pumpkin to pick it up and throw it (giving it the ability to both move like a queen and attack).

I didn't have enough time to build a competent AI, though seeing your video made me realize that even a ruthless AI would have helped a new player learn how to play. I also wanted a sort of Instructions screen or Demo mode, but I was also short on that.

But I think you are right: there is probably not enough variation to make two competent players not end in a stalemate or somehow favor either the first or second player (not sure which--I didn't play test that enough). One mechanic I wanted was to allow a farmer to plant additional pumpkins.

I've promised myself to stick to adding these 2-3 features prior to moving on to another solo jam. I've been doing a lot of refactoring in preparation for adding a minimax implementation--I definitely couldn't have added that in a week long jam. 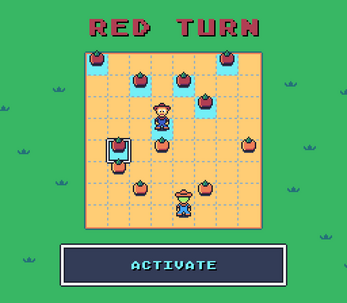